It is no surprise that Samsung Electronics Chairman Lee Kun-hee, 75, is once again recognized as the richest man in Korea with a total value of assets, including listed stocks and real estate, reaching 15 trillion won ($13.1 billion).

The Herald Business and The Korea Herald’s list of Korea’s Richest 100 was updated recently to reflect the index depicting the economic reality in Korea and the increasing influence of entrepreneurs on the economy.

In the newly updated “2017 Superich Teams Richest 100” list, it remained difficult to find entrepreneurs in Korea who have surpassed their parents or grandparents in terms of wealth.

Likewise, the top 10 on the list remained unchanged. Half of the top 10 richest people were part of the top three conglomerates in Korea — Samsung, Hyundai Motor and SK. The rest of the 90 people were also main figures in the business world.

The combined value of assets owned by Korea’s richest 100 amounted to more than 110 trillion won, 1 to 2 percent of the wealth owned by the entire Korean population. The difference in the average asset value between the top 50 and the country’s upper 50 percent of households was more than 2,000-fold. The gaps between founders and their successors were significant as well.

The value of assets under Lee Kun-hee’s name was found to be around 15 trillion won, by combining the value of his listed shares (14.8 trillion won) and domestic real estate (156.6 billion won). Lee’s real estate assets include 10 buildings and land such as his houses in Jung-gu and Yongsan-gu, as well as four pieces of land in Gyeonggi Province. The total area of the land added up to 25,535 square meters. There are estimations that the actual value of all his real estate may be higher since some of the prices are not registered.

The second on the list, Suh Kyung-bae, 54, is the chairman of Amorepacific Group. Suh’s personal assets were worth 7.1 trillion won — including real estate with a value of 26 billion won — less than a half of Lee. His listed stock assets used to be worth almost 10 trillion won in January 2016, but he suffered a loss of over 2.6 trillion won during the year as the stock value of his major firms dropped significantly.

Lee Kun-hee’s eldest son Lee Jae-yong, 49, vice chairman of Samsung Electronics, was the third on the list with 6.8 trillion won worth of assets, the largest among the third generations in the corporate world.

There are two more self-made men like Park in the top 10. Among the other eight, five were family members of the top three conglomerates including Samsung, Hyundai and SK.

Of those on the list, 30 were tallied to have more than 1 trillion won worth of assets. Dongwon Enterprise Vice President Kim Nam-jung, 44, the youngest son of Dongwon Group Chairman Kim Jae-chul, just made it to the 30th with 1.2 trillion won. 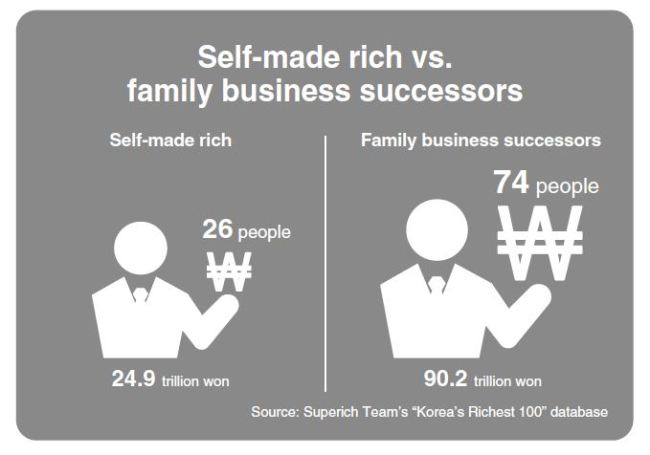 Among Korea’s richest 100, there are 24 founders, excluding second to fourth generations and management specialists that have succeeded management rights. The total value of the founders’ assets was 24.1 trillion won as of Feb. 10, owning more than one trillion won per person.

The industry that the most founders focused on during their establishment was information technology (seven), which includes online game, portals, and mobile messaging. Next was pharmaceuticals (four), such as biopharmaceuticals, and construction (three).

The sole founder in his 30s is the CEO of DoubleU Games Kim Ga-ram, 39. He is also the only one on the list to have founded a company after 2010.

Having graduated as an electrical engineering major at Korea Advanced Institute of Science and Technology, Kim worked as the head of the business department at Innogrid, a company specializing in clouding, until he founded AFewGoodSoft with 80 million won in capital. In 2013, AFewGoodSoft changed its name to the current DoubleU Games.

DoubleU Games is a game company that relies on social media platforms. The success of DoubleU Casino in North America and Europe has allowed DoubleU Games to reach $50 million in exports within three years of its establishment, and 100 billion won revenue in 2015.

Kim owns 42.57 percent of DoubleU shares listed on Kosdaq which was estimated to be worth around 296 billion won as of Feb. 10, ranking 92nd on Korea’s Richest 100.

About 70 percent of subcontractors say that their business environment with big companies is improving, as their clients expand... read more

Korean Pharmaceutical Association (KPA) is a non-profit association established by Korea Pharmacists Association in the year 1928. Around 60,000... read more

Every electrical component has a unique and highly specific job. Without one of those components, the circuit will not... read more

Tourists to get easier tax refunds

The Cabinet on Tuesday approved a decree to allow foreign tourists tax reimbursements of up to 50,000 won ($42)... read more

Food Processor – Just The Thing You Require In The Kitchen Area

By now, everyone knows I love anything that will make preparing food easy, fast and simple. One of the... read more

Samsung Electronics has decided to buy Harman International Industries, a U.S. automotive part supplier for $8 billion, in a... read more

A joint venture in agricultural machinery

Roy Cokayne LISTED distribution group Barloworld and Munich-based BayWa plan to set up a joint venture for the supply of... read more

On his first full weekday in office Monday, US President Donald Trump signed an executive action to abandon a... read more